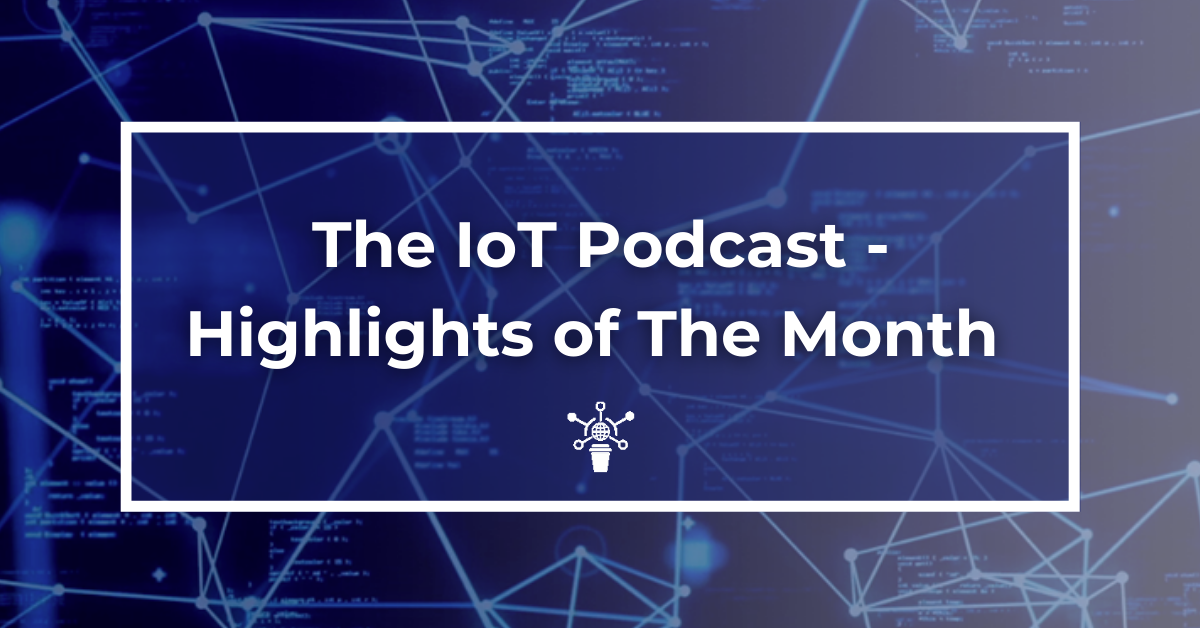 Last month was a big one for The IoT Podcast!

The podcast was winding off season one in August, and featured some big guests to round up the season.

Missed any of the action?

This is your chance to catch up on everything that happened at The IoT Podcast in the month of August.

To start off the month, Rony Cohen– CEO at floLIVE sat down with Tom White in person at The IoT Podcast Bristol HQ to talk about the world’s first Software-Defined Connectivity (SDC) solution.

The episode delved into a variety of topics around the 5G revolution, connectivity and security vulnerabilities to why global infrastructure is so important.

Rolling on the month, the podcast got to grips with the world of IoT for Health, Fitness and Recovery.

Christopher Slee – CTO, Include Health and AWH revealed how the Internet of Things is being used to innovate our health and fitness from customisable smart gym machines being used for recovery and in the US Armies to track fitness levels and progress.

Want to find out more about Smart Gyms and how IoT is being applied in Healthcare? Check out Chris’ episode.

And the episodes didn’t end there. The podcast caught up with Christine Chen and Sudhir Sarangpany from Vodafone IoT in the middle of the month to explore the transformational end-to-end solutions being developed at Vodafone IoT and how the wide deployment will change connectivity as we know it.

Missed it? Check out the episode to discover E2E solutions from surveillance to device security.

After hosting their first-ever exclusive conference in collaboration with IoT Day, The IoT Podcast followed up with a special episode unveiling highlights from the day.

Tune in to the special episode and discover exclusive insights into the IoT innovations happening across the globe.

Onto the second half of the month Cyril Deschanel– MD at Tele2 IoT joined the podcast to give insights into how the IoT ecosystem is moving forward and how businesses can leverage their expertise to extend the value of IoT to customers.

Catch up with the full episode below.

DATA SCIENCE AND AI – WHAT’S IT ALL ABOUT?

Stephen Galsworthy, former Chief Data & Product Officer at Quby discussed all things Data Science and AI to illuminate our knowledge on how AI and Data Science are both being used together to extract value from IoT devices in the Smart Home and beyond!

If the combination of AI and Data Science is something you would like to find out more about- check out the full episode.

The season one finale ended with a big one as Suhail Khan – Director of Development, Programming and Engineering at Huawei joined the podcast to uncover and discuss the highly debated question of whether ‘Tech can be all good?’.

Suhail unveiled the innovations he has been working on at Huawei, including the Harmony OS and how this is changing the game for IoT.

AND THAT’S A WRAP!

The IoT Podcast concluded with a huge month, featuring a range of Industry professionals from varying IoT fields to share their stories, innovations and contributions to the fascinating world of IoT.

While we have to wait until October for Season Two to be unveiled, we can still get our IoT fix from all 50 episodes in season one.

Which was your favourite😉 ?

To catch up with all blogs and updates from The IoT Podcast – head on over to theiotpodcast.com

The competition is heating up for today’s talent consultants, making the need for a personal…

In video tech, there is a term that gets thrown around often amongst the throws…