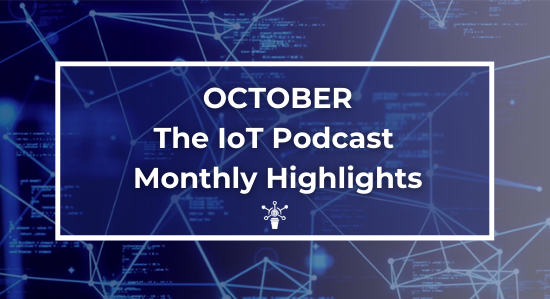 October was a significant month for The IoT Podcast, launching the second season of the show there has sure been a lot to catch up on.

And the Season Two kick-off has been a firecracker, the show has already had some groundbreaking guests who have come on to share their fascinating insights into the ever-evolving world we call the Internet of Things (IoT).

Missed any episodes from the Season Two launch? Well not to worry, in this month’s The IoT Podcast Monthly Round-Up we reflect on all the happenings of the brand-new Season!

Getting to grips with the position of the IoT ecosystem…

To kick off the season, Rob Tiffany – VP, Global Head of IoT Strategy at Ericsson got down with the podcast to share his thoughts on the status of IoT and why IoT has not yet reached its full potential as predicted.

But those weren’t the only hot topics that were discussed, Rob took us for a tour around IoT security, digital twins and whether the future is bright for IoT.

Tune into the episode now if you want a 360 look into the world of IoT from someone who has been in the industry from the very beginning!

Continuing the launch, Teppo Hemiä – CEO at Wirepas joined the podcast to talk about 5G-non cellular development and how this is challenging the traditional cellular monopoly.

This is the episode to tune into if you’re wanting to find out more about the first non-cellular standard and what this will enable for IoT development.

Get your Agritech fix!

Agritech and IoT have come to go hand in hand – but what will be enabled in the future?

Sumanta Talukdar – CEO and Richard Osterloh– Lead Systems Engineer at Gardin Agritech joined The IoT Podcast in the middle of the month to answer this question!

Here are a few questions you are sure to find the answer to in this episode:

To end the month of October, The IoT Podcast got spooky with Rob Walczak, the Founder at Ghost Gear Tech in our Halloween Special to enter the realms of how IoT is evolving paranormal investigative equipment.

Tune into the episode if you’re curious about how IoT can be used to find ghosts – or even to explain a scientific reason for paranormal activity.

Want to always be kept up to date?

The first half of the season two kick-off has been a hit, featuring a variety of guests from different spans of the IoT ecosystem.

To keep up with all new episode releases and updates make sure to subscribe to The IoT Podcast YouTube channel!

Ada Lovelace – Who was she?

As another year starts to draw to a close, the trees begin to wilt and…

Top 5 Interview mistakes you should avoid!